Born in Toronto on July 13, 1919 to Rosario and Concetta Cannata. He was predeceased by his sisters Ann and Kay and brothers George, Tony, Vic, John and Tom.

The family is very grateful to all those who helped with calls and visits. Family and friends may call at the Ogden Funeral Home, 4164 Sheppard Avenue East, Agincourt (east of Kennedy Road), on Thursday, December 27th, 2-4 and 7-9 p.m . A celebration of Joe's life will be held in the Ogden chapel on Friday, December 28th at 11 a.m., followed by a reception lunch. Cremation has taken place and there will be a private interment at Mount Hope Cemetery. Donations to a charity of your choice would be gratefully appreciated.

Joe was charismatic, principled and lived life large - evidenced by his love for people!

Visitation to take place at McDougall and Brown Funeral Home, 2900 Kingston Road, Scarborough, 416-267-4656, on Thursday, December 27th, from 2-4 and 6-8 p.m. Funeral Mass to be held on Friday, December 28th at 10 a.m. at St. Rose of Lima Catholic Church, 3216 Lawrence Avenue East, Scarborough. Interment at Pine Ridge Memorial Gardens, 541 Taunton Road West, Ajax. As expressions of sympathy and remembrance, donations to a charity of choice would be appreciated.

An informal Lions Farewell will be held at the 6-8pm viewing on Thursday, December 27 shortly after 6pm. Hopefully as many of you as possible will manage to be there. If so, please wear your Lions convention vests or other suitable Lions attire. I suggest that this be a celebration of Lion Joe's life, and as such this will be a short session with myself, plus one or two invited speakers only. For those of you who don't know, Joe Burke was a Lifelong Member of Lions with 50+ years of service so let's give him a good send off!

of the Toronto Kaiteur Lions Club.

Please do not send flower condolences at the family's request.

May his soul, and the souls of all the departed, through the mercy of God, rest in peace.

was born and raised in Toronto, the youngest child of Francesco and Angelina De Laurentis (née Apostoli), immigrants from the Miano area of Abruzzo, Italy. Growing up on Centre Avenue in The Ward, Willie learned flute, clarinet, and saxophone. He performed professionally with a variety of jazz and big bands throughout the 1930s and 40s, including the Trump Davidson Band and George Saltstone’s Orchestra. While gigging around Ottawa he met Freda Milne whom he married in 1941.

During WWII, Willie served with the Governor General’s Foot Guards as sergeant and saxophonist, performing regularly on Parliament Hill.

In 1948, he and his brother Joe opened The Dell Tavern, one of Toronto’s first Italian restaurants and a popular hang-out for local businessmen, musicians, doctors, and newspapermen. The brothers expanded the business in 1962 when they opened the Theatre in the Dell. It gained renown with cabaret shows such as What’s a Nice Country Like You..., Oh Coward! and Toronto Toronto, and provided a venue for actors and singers, many of whom later found fame in Hollywood or TV. The Dell remained a fixture on Elm Street until the brothers’ retirement in 1986.

Willie, known as Bill in business circles, was a Past Chair of the Harry Newman Foundation, a Past President and a member of the Toronto Central Lions Club for over 60 years, and a member of the Islington Golf Club for almost as long. For him, the good life was golfing with friends, a meal with family, and a glass of good brandy while enjoying the ball game.

This past summer he sold his home of 57 years to move to Elora. He is predeceased by his wife Freda, son Frank, brothers Fred and Joe De Laurentis, & sisters Silia De Laurentis and Eda Pompilii. Surviving him is his son Fred De Laurentis (Margaret) of South River, granddaughters Talia De Laurentis of Rockland, & Elysia DeLaurentis (Ernie Kalwa) of Elora, as well as a host of friends and relations, all of whom will miss him dearly.

For those who wish, donations may be made to the Lions Club of Toronto (Central), Suite 423, 157 Adelaide St. W., Toronto, M5H 4E3. Online condolences may be made through www.turnerporter.ca.

It is with heavy heart to announce the passing away of Past Zone Chairperson James Carino of the Toronto Mabuhay Lions Club. Below are the particulars of the Funeral Services:

Owner and operator of McEnery Insurance and Real Estate for 55 years, Member of Wellington Lodge #271 (M.M.) for over 50 years, Member of Rameses Credit Valley Shrine Club in Georgetown, and Charter President of the Erin Lion's Club and member for 61 years.

many years with the Thornhill Lions and most recently the Mount Hope Lions Club
EARLE, Ellen Marie It is with deep sadness that we announce the passing of Marie, in her 83rd year, on Sunday, May 13, 2012 at St. Peter's Hospital in Hamilton. Predeceased by her husband Harry Earle and parents Christopher and Mary Barnett. Sadly missed by her sister Sandy Haight and her husband Jim. Survived by her many brothers and sisters-in-law and nephews and nieces. Remembered by many neighbours and friends.

Marie served for many years with the Lions Club of Thornhill and most recently the Mount Hope Lions Club. She was involved in many activities and commitments with the Club but took special interest in the Dog Guides of Canada. She participated in a number of fund raising programs that eventually sponsored a guide dog. The family would like to thank Dr. Steven Hadcock, the staff of Carrington Place, CCA, Dr. Bev, Donna, Peter, Cindy and the staff on 3 West at St. Peter's Hospital in Hamilton for the care and support they gave Marie. Cremation has taken place. A Memorial Service will be held on Friday, May 25, 2012 at 11:00 a.m. at Mount Hope United Church, 3076 Homestead Rd. off Hwy. 6 in Mount Hope. In lieu of flowers, donations to the Lions Foundation of Canada in Oakville (Dog Guides) would be appreciated.

LAWLESS, Donald (Doug) Peacefully at St. Peter's Hospital, Hamilton, on Wednesday, May 9, 2012 in his 89th year. Beloved husband of Dorothy (née Turnbull). Loving father of the late Murray and the late Dianne. Dear brother of Keith Lawless. Survived by his many nieces and nephews. Predeceased by his sisters Doreen Johnston, Margaret Doig and brother Ross Lawless. An educator for fifty years, Doug began his career in Huron County and taught later in the City of Peterborough and the University of Toronto Schools. In 1954, he was appointed Inspector of Public Schools in Norfolk County and subsequently as Superintendent Public Schools and Assistant Director of Education in Burlington and Halton County, Director of Education for the City of Ottawa and Senior Official in the Ministry of Education. He co-authored books in mathematics and handwriting used in Canadian schools.

It is with heavy heart to announce the death of Lion Jack William Able, a long-time member of the North York Central Lions Club.

In lieu of flowers, Lion Jack Able wished that donations be given to North York Central Lions Club. 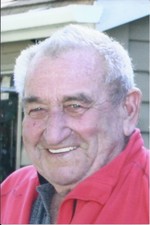 It is with great sadness that I must ask you to please notify all the Lions of A711 that Lion Gus Mowbray, a Charter Member of the Milton Lions Club, passed away on January 6. There will be a Lions service on Sunday, January 8 and visitations at the McKersie-Kocher Funeral Home in Milton.